A cute dog and a cat, and a single moment of love

Elsa Clair, my cat, does not get along with other cats. Dogs, for example. Or the vast majority of individuals.

She isn’t a jerk. Maybe to the other cats if they get close enough to swat. The point (LOL!) is that Elsa Clair doesn’t have time for anyone other than me, four-pawed or two-pawed, unless they’re cooking her dinner.

To be honest, I never knew if she was aware of the dogs’ existence. She ignored them so vehemently that if someone had asked me what I think my cat thinks of her canine siblings, I would have responded that she probably regards them as movable furniture—except that she can’t jump on them.

When I went outside this morning to clear the deck of the clueless young wildlife who hasn’t yet learned to flee when I bring the dogs out, I noticed two pairs of eyes peering at me through the sliding glass doors. Tucker and Elsa Clair were both keeping an eye on me. Even a large picture window isn’t big enough for my little dragonette and anyone else, and Elsa Clair doesn’t do sharing.

I snapped a photo and then decided to record the two of them, as this was a rare glimpse of the beastie being tolerant and Tucker not hiding from any of our more sharp relatives. This is the dog who hides under the bed when the cats come into our room, and who finds excuses to be in the living room while the cats are being fed.

Anyway, I began filming, and suddenly the most incredible event occurred.

It’s only 30 seconds, but in that small amount of time, there are so many beautiful moments.

The only sound you hear is birdsong, which sounds like something out of a Disney film, but if you watch closely, you can see Elsa Clair meowing at Tucker. She is conversing with him.

She then rubs his back. And he sinks his teeth into it.

Following that, they appear to be at a loss for what to do, as though the situation stunned them both. They exchange glances. 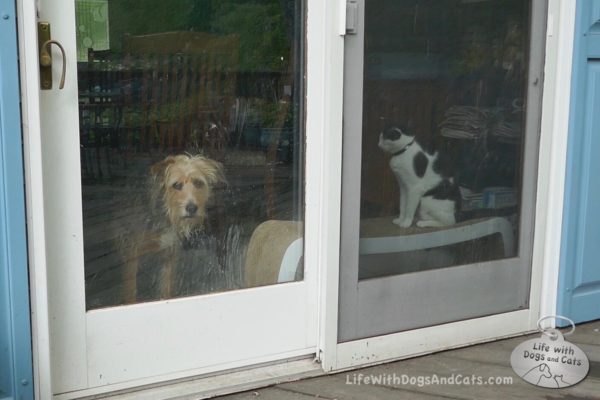 What happened was that two creatures who would typically ignore one other, hurl hissy insults, or slink away and hide discovered a way to share a moment, to be nice and loving to one another.

This is exactly what you’re looking for, people. This is what it’s like to live with dogs and cats.

There are always surprises to be found.

And there’s always the possibility of a happy ending.

And I believe we could all use a little hope now and then.

What do your dogs give you as gifts?